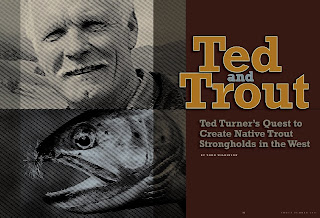 Ted Turner is a polarizing figure in Montana, most folks either love him or hate him. He's a rich and powerful man who owns some prime Big Sky real estate, his private holdings scattered throughout the country make him the largest individual landowner in the nation. Every acre of his empire is gated and locked - shielding him from the unwashed masses. It is that very fact that draws the ire of many Montanans. Yet Ted Turner is doing nothing differently in regard to public access than are thousands of other private land owners across the state, and throughout the U.S. for that matter.

It's his land, to do with what he pleases. And what he is doing with his land is interesting: he's creating native fish and wildlife sanctuaries - with an eye toward both conservation and profitability.

A project to restore native westslope cutthroat trout on his massive Flying D Ranch in southwest Montana created quite a stir last summer. The project restored 65+ miles of the Cherry Creek drainage for westslope cutts. The angling public wasn't exactly thrilled about a large scale (est. $500,000) restoration project on private land (with no public access) involving Trout Unlimited and Montana Fish, Wildlife & Parks. Adding fuel to the fire was the fact that fisheries biologists botched the application of pisticide in the creek (a Madison River tributary), resulting in massive, unintended trout die-offs downstream from the project area.

And so it was with great interest that I read a feature article in the current issue of TROUT magazine titled, "Ted and Trout". The article discusses the man's, "Quest to create native trout strongholds in the west." The Cherry Creek project was certainly in that vein, and effectively resulted in a ten-fold increase in the amount of occupied westslope cutthroat habitat in the upper Missouri River Basin. That's significant and should be applauded, as should the fact that Turner picked up the vast majority of the tab for the project.

It's highly unlikely that you or I will ever have an opportunity to fish for westslope cutthroat on Turner's Flying D Ranch. Even so, this project benefits us - as anglers - by helping to solidify the viability of westslope cutthroat in Montana, both now and into the future.
at 1:29 PM