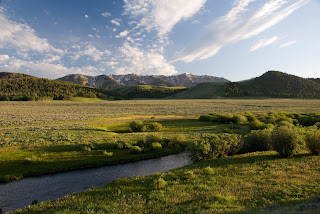 I don't remember just when or where I first learned of the creek. Maybe it was at Bud Lilly's in West Yellowstone as I eavesdropped on a hushed conversation while perusing the fly bins. Or perhaps it came from loose lips over a frosty pint at the Silver Dollar in Ennis. Truth be told I probably couldn't trace my fascination with this particular fishery back to any single source. Bit by bit over the past couple of years I've accumulated a pittance of knowledge about the place...never enough to really go by, but just enough to keep me intrigued. 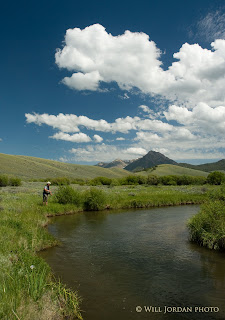 Legend has it that the creek hosts a mysterious, almost ghostly run of very large cutthroat trout. What's more, the rumor of this run is substantiated by sound, but antiquated, stream survey data compiled by fisheries biologists. My own trips to fish the creek have done little to sort out fact from fiction. Were it not for an occassional rare, unabashed report from fellow anglers, I'd probably have given up on the place long ago.

Last Friday marked my third trip to fish the creek in search of its phantom cutthroat trout. The two previous trips had resulted in few if any trout caught and those that were caught certainly weren't of mythical proportions. This trip proved to be no different, nary a trout was brought to hand despite the fact that a very able angling comrade and I spent eight hours methodically prospecting some excellent looking water along various portions of the stream. 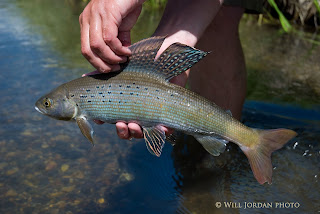 Fortunately the creek offers more than just a long shot at hooking up with migratory cutthroat trout. The watershed harbors a remnant population of a rare, wild fish native to Montana - the arctic grayling. I've caught the species in some mountain lakes throughout Montana - and even as far south as Arizona - but this particular population is special. This is one of the few remaining fluvial/adfluvial populations of grayling occupying native habitat in Montana - the only state in the lower 48 where the species still occurs naturally. 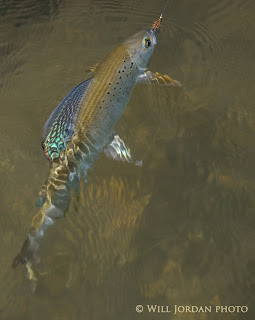 I'll always look forward to returning to this mountain valley for its unspoiled beauty and for the grayling, yet I'll always be hoping for something more. I've bought into the rumors and hearsay, and it may have been a stream-side conversation on Friday that cemented my belief. As we got back to the truck after fishing an unproductive stretch of water, another vehicle coasted to a stop alongside us. The rig's lone occupant, an angler, stepped from his truck and proffered a bit of experience based knowledge of the creek. As he rigged his rod he seemed quite confident in his ability to find what we had missed. The thought of him catching big cutts in our backwater that evening was almost too much to bear, but at the same time it was an oddly comforting thought.

Should I ever find myself tight to a big cutthroat on this stream I'll thank my lucky stars. In the meantime I'll enjoy the legend and lore that the creek is enshrouded in, and the process of unraveling the mystery.
at 6:20 PM