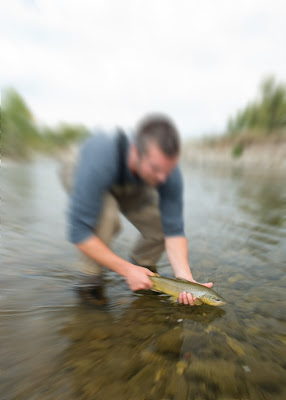 He's been fly fishing for all of a month. During that span he's spent more time on the water than the average angler does in a year. He already knows more knots than I do. Complete strangers complement his cast. He's starting to ask questions that I don't have the answers to. I'm afraid I've created a monster.

He was the perfect candidate. He loved catching trout on Bozeman area rivers, but he was doing so with crankbaits, spinnners and spoons. To be completely honest, my initial motivation to convert him to fly fishing was largely an attempt to spare the local trout from his treble hooks. I noticed as he listened intently to the fly fishing conversations I held with mutual friends. And so when the day came that he exclaimed, "I wish you'd tell me what the f-ck mending is," I knew it was time.

Before his fancy new Redington rod and reel had even arrived, he'd learned a great deal. He was devouring fly fishing how-to books, absorbing all he could from masters such as Whitlock in the process.

The day his set-up arrived we spent an hour or more working on his cast in the front lawn - in the dark. He cast late into the night, long after I left. The next morning, before the sun had crested the Bridger Range, he was knocking on my front door, bright eyed and ready to go fishing!

We walked out to the river behind my place, where I gave him his first on the water instruction. Line handling gave him fits, but otherwise I was impressed with his intuition for casting, shooting line and mending. A morning that I expected to be nothing more than a glorified casting lesson turned into a fishing trip. He soon hooked, landed and released his first trout on a fly - a flawless wild brown of 15-inches. To top it off he caught it on a dry fly. I don't think I'll ever forget seeing that trout slowly break the surface and inhale his fly. It was perfect. His enthusiasm upon hooking that fish was something to see, STOKED doesn't begin to describe it.

We've fished together a few times since that day, most recently last weekend on the lower Gallatin. It was a classic day of fishing for fall browns under overcast skies. His progress was noticeable. I chucked a huge articulated streamer all day and schooled him (not that we were in competition, but I can't let his ego get too big), and he held his own nymphing with a tandem rig under an indicator.

It's pretty cool watching the progress of someone who you've introduced to the sport of fly fishing.
---
No sooner had I finished writing this than guess who calls? Right, The Prodigy. Before even answering the phone I knew he was calling to give me his fishing report for the day...he spent today fishing a river in Montana that is known for cranking out huge trout on occasion. So the conversation went a little something like this:

Turns out he wasn't kidding. It's too soon for this. Where does a guy go from here? 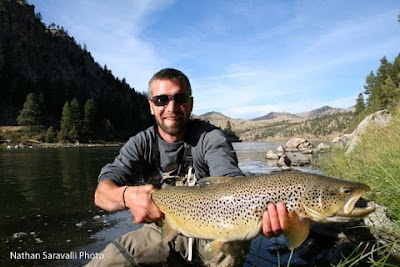