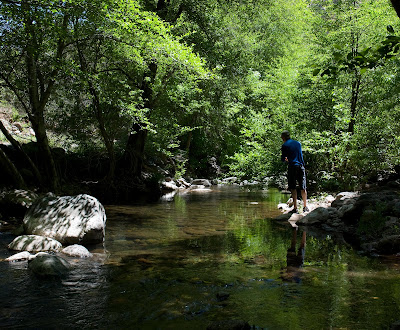 I went back. Back to where it all began. A drift down memory lane.

Last week I hopped on a big old jet airliner, leaving behind a wintery Montana for a sun drenched Arizona. It was good to go home, to see family and friends, to just be in Flagstaff, and to wet a line at some familiar haunts.

As I eased my Teva clad feet into the water of Oak Creek, and later Wet Beaver Creek, I felt an overwhelming sense of deja vu. At the same time I felt distinctly out of place. I haven't been fishing small streams nearly enough since I moved to Montana, and it showed. For the past three years I've been focused on learning how to fish the big water of rivers such as the Yellowstone, Madison and Missouri, a task that was quite overwhelming initially. Now the tables had turned and I seemed to have lost my old knack for catching trout on small streams.

The intimate pocket water of these Arizona streams had my drifts feeling like awkward, discombobulated, thingamabobbered, obtrusive affairs. I was sloppily spooking fish left and right in the low, clear water. The combination of my 9' rod and even longer leader were rather ridiculous...it's tough to load a 5 weight with only a few inches of line extending beyond the rod tip!

I was humbled. I thought I'd learned so much in Montana over the past few years. I thought that I was going to bring those new found skills back to AZ with resounding success. That wasn't the case, I quickly found that I couldn't impose my new tricks upon these streams. Eventually I settled back into old rhythms, shortened my leader, employed a dry-dropper setup, reduced my false casting, and kept to the shadows as I worked upstream. It felt good to be back in tune with things.

I returned to Montana a couple of days ago, just in time for the opening day of fishing season (many small streams and larger rivers such as the upper Madison are closed until the third Saturday in May). Despite the fact that yesterday may very well have been the last day of fishable conditions on our big freestones until after runoff, I found myself on a couple of small streams in the Gallatin Canyon. I loved every minute of it.

I've been reacquainted with the magic of small stream fly fishing and I'm looking forward to maintaining that connection.
at 10:05 AM