The JJ is Special 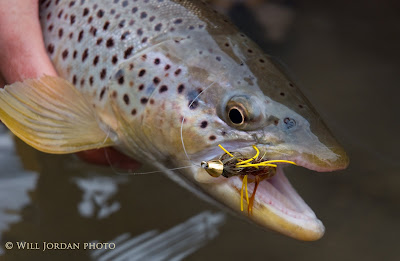 An angler's confidence in a fly is an interesting thing. Call me crazy, but it almost seems as if those positive vibes are transferred down the line and to the fly, giving it an effectiveness that it doesn't posses at the hands of a pessimistic angler.

I've had some favorites over the years, flies that inspired great confidence on the water. Back in the day it was a brown bugger. Then it was the stimulator. This winter it was a partridge and pink soft hackle. I've got a lot of love for the Chernobyl family come summer. But at the present time, the JJ Special is a fly that I have a great deal of confidence in.

The fly represents nothing exactly, but many things loosely. I believe it's a very effective crayfish imitation. I'm sure it's taken as a stonefly nymph at times. It certainly has some baitfish qualities to it. It's an easy tie and the standard recipe turns out a tasty product, but when tied in various colors and sizes the fly can represent certain trout (and bass) delicacies even more effectively. A black, or black/yellow JJ is a solid variation, as is an olive JJ. In its various incarnations, the JJ has now overtaken half of my bugger barn.

The fly is absolutely deadly on the drift, on the swing or stripped. Most of my confidence in this fly comes from dead drifting it in tandem with a smaller nymph. But then many a good fish has fallen for the JJ at the tail end of a drift when it swings and rises in the current, its rubber legs and marabou undulating invitingly. And there have been many memorable days spent pounding river banks with a JJ, stripping it feverishly through the lies of big, streamer eating browns.

I've caught rainbows, cutts, browns and smallmouth on a JJ. It has hooked me up in some dire looking situations, where visibility was under a foot. In gin clear water the fly can be a bit gaudy, but still plenty effective. It may be at its best somewhere in between these conditions, when the water has a touch of green to it and visibility is in the 3- to 4-foot range. It's generally at home in big water, but I've had success with it on smaller streams, particularly if browns are part of the equation.

I'm gushing a bit, I know, but the JJ really has been good to me. Case in point: over the past two days I caught about a dozen fish with it on the Madison River below Beartrap Canyon, including both my largest brown and rainbow to date on this stretch of river.

For whatever reason this fly has instilled a little extra confidence to my fishing, and there's something to be said for that.
at 11:13 AM