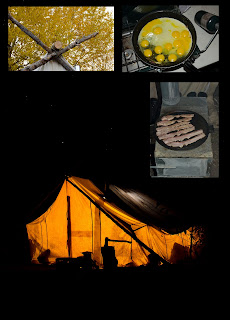 Illuminated by the glow of a gas lantern and warmed by lengths of pine burning in the wood stove, the timber frame wall tent made for a rustic and comfortable camp at day's end. We were here, a long way from anywhere, in the hills of Montana, with trophy hunting as the impetus.

October in Montana is many things to many people. For some it's all about getting in the first high country powder turns of the season, cranking out a few more miles on dry singletrack, or simply enjoying the fall foliage along a favorite hiking trail. But perhaps more so than any other fall pursuit in Montana, hunting takes center-stage come October.

The hunt can take many forms, from trailing pointers through CRP fields, to pursuing bull elk in timbered mountain haunts, or - as in our case - seeking out the fall runs of trophy brown trout.

Last week we loaded up with a few days worth of fishing gear, provisions and firewood. Our arrival was a bit early in regard to the peak of the brown trout run on this river, we knew that, but it was the time-frame that accommodated our collective work schedules. We hoped that our early arrival also meant we'd find less competition on the water from fellow anglers, and fewer actively spawning fish to disturb. 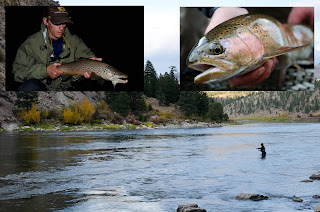 It turned out we were definitely early. Too early. The big browns weren't in yet, at least not in any significant numbers. We had our shots at a couple of big browns, and managed to land a few solid fish - mostly rainbows, but it wasn't quite what we'd hoped for. Fortunately a good fishing trip is about much more than just the catching.
at 9:26 AM