Brooks, Galloup, LaFontaine, Marinaro, Mathews, Troth, Wulff, et al, fly fishermen who have questioned conventional angling wisdom, pushed the boundaries and - perhaps most importantly - shared their knowledge. These legends, among others, have contributed greatly to the furthering of the sport. They've developed and implemented many of the theories and techniques that the rest of us have glommed onto, and that we've caught more fish as a result of.

Many of these names are from a bygone era of innovators, anglers who weren't satisfied with the status quo. Following in their footsteps are the modern day masters who have brought us refined and revolutionary flies and angling techniques. 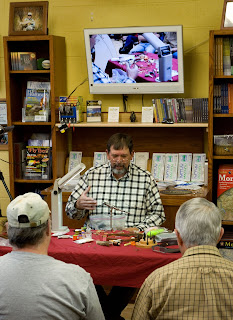 Living in Montana exposes the average angler to a wealth of fly fishing knowledge. Even in Montana, or perhaps especially in Montana, the fly fishing community is fairly small and tight-knit. Opportunities to meet and talk with true legends in the sport aren't uncommon. One Bozeman fly shop, Montana Troutfitters, is providing just such opportunities this winter. In their annual "weekends with the legends" series, anglers have an opportunity to learn from some of the best.

This Saturday I made a point of getting over to the shop to listen to Tim Tollett. There was a good turn out for his three hour presentation, in fact it was standing room only by the time I arrived. Tim is from Dillon, Montana and is the owner and operator of Frontier Anglers. I've corresponded with Tim a bit over the past couple of years, he'd recently provided me with some invaluable information about Poindexter Slough - a public spring creek in the Dillon area. From that correspondence it was obvious that Tim knew his stuff, but until Saturday I had little idea just how knowledgeable the man is in the ways of trout.

It was a truly humbling couple of hours spent trying to absorb the wealth of knowledge that he was sharing. It is at times like these when I realize just how little I really know about fly fishing, entomology and trout behavior. While tying up some innovative cranefly and midge patterns that he uses on the Beaverhead River, Tim told stories about fishing with legends Al Troth and Lee Wulff. Did you know that flashback nymphs were first introduced to anglers in the United States by Tim? He brought the flashback wingcase to the states much the way Tom Rosenbauer brought the beadhead onto the scene - by seeing it used overseas and recognizing the significance it could have for American anglers.

All in all it made for a pretty nice little Saturday. I'm looking forward to next week's presentation and learning all I can from Mike Lawson.
at 10:40 AM