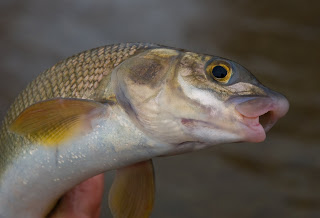 As I write this I'm polishing off the last of my stash of a Rocky Mountain delicacy: smoked whitefish. That's right, those spastic salmonids that grace - or disgrace, depending on your point of view - angler's nets throughout the mountain west are downright tasty.

At some point in the last year it came to my attention that the daily limit on whitefish is absurdly high on most Montana rivers. On the Gallatin River for example, the limit is twenty whitefish per person, per day. On other rivers the limit is as high as thirty whitefish. I found this to be ridiculous, after all what would a person possibly do with so many whitefish? And is it even possible to fill the daily quota?

Well last week a buddy and I decided to find out. After putting in an honest eight hours at the home office I met up with Matt at Axtel Bridge on the Gallatin. Our plan was simple: dead-drift tandem bead-head nymph rigs below an indicator until we were delirious...there's no surer way to catch whiteys.

Despite the best of intentions, our whitefish derby started off on the wrong foot. As we left the parking lot at Axtel, double bead-head rigs in tow, we noted several rises below the bridge, followed by scores of rises in the deep run above the bridge. Closer examination revealed some above average size trout rising to a prolific baetis hatch on this cold, cloudy afternoon. You can probably guess what happened next. 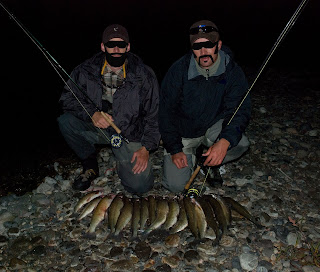 After spending a precious hour or so of daylight catching trout on emergers, we finally got back on track. On my first drift with a heavily weighted, bead-head prince/pheasant tail combo, the indicator hesitated and I found a spastic, head shaking whitey on the other end of the line. Instead of releasing this fish as I typically would, it was quickly killed and kept. For the next hour the action was fast and furious, I landed seven or eight whitefish during that time span, along with the occasional brown. Matt wasn't quite so fortunate, his whitefish mojo was lacking. On any other day that wouldn't necessarily be a bad thing, but unfortunately for him we had a friendly wager going: whomever had the fewest whitefish at days end bought the beer that night.

Despite my early lead, things started getting competitive about a half hour before last light. I was up by two fish when we arrived at a long deep run that surely held numerous whitefish. Matt quickly hooked into a toad of a whitey, which I may or may not have intentionally botched the netting job on. I was working hard to maintain my lead, but kept catching pesky browns - one after another. Matt meanwhile had wised up and was netting his own fish, he was in the zone and quickly evened the score. So here we were, tied up with just minutes of daylight remaining. We agreed that the next fish - whitey or trout - would be the tie-breaker and crowning catch. As luck would have it I quickly hooked, landed and released a small brown trout, securing my victory. 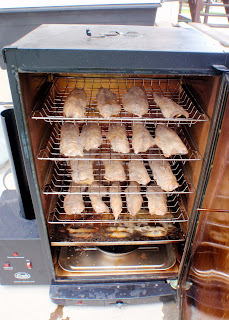 After a few photographs to forever immortalize our gluttony, we went to work. Seventeen whitefish had been brought to hand between the two of us in about two hours time. The dirty work done, we prepared a basic brine (1/2 cup salt, 1/2 cup sugar, mixed with a quart of water) and arranged the fillets over apple wood chips in Matt's smoker.

The results far exceeded my expectations. On par with smoked salmon it is not, but smoked whitefish is delicious in its own right.