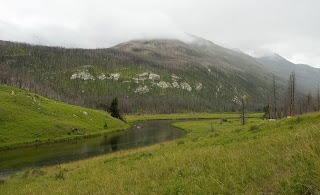 Fall is in the air in Montana. Those amazing summer evenings spent fishing to rising trout in the arctic twilight until 10pm are but a distant memory. Wet wading opportunities are waning. The mountains are already snow-capped, high elevation aspens are turning to gold and bull elk are gathering their harems. It will soon be time to pull wool and down from storage.

Summer is a fleeting season in Montana to be sure, but it's a season to cherish. As the fall equinox approaches I can't help but assess my summer season. While I'm kicking myself for never making an extended alpine lake trip this summer, I did get in some high elevation tributary fishing - an endeavor best suited to the summer months.

Two trips in particular stand out, both of which took place within the past three weeks or so. I'd fished both of these high elevation tributaries last summer and had vowed to get back again this summer, they are special fisheries.

The first of these trips was to a location that I'll just call the West Fork. It is a doable day trip from Bozeman and that's how it went down. From the Forest Service trailhead, a hike of a few miles reveals a sprawling, high elevation meadow stream that is home to good numbers of nice brown trout. In my limited experience on this fishery, the resident browns are very willing to take dry flies. 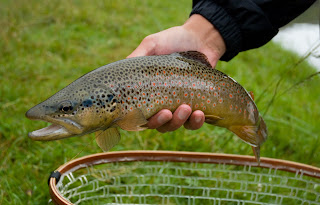 We had arrived with high hopes for good hopper fishing, but a cold, rainy day thew a wrench into our plans. A few trout were taken on a small chaos hopper, but the bulk of the action came on emergers and small dries. On this day I refrained from blindly spraying casts - my usual style - and instead sought out rising fish in this spring creek like environment. It was a rewarding day. Later in the afternoon I managed to break away from the meadow and spend some time exploring the pocket water upstream. I was quite surprised to catch the biggest brown of the day from a deep run a good distance above the meadow.

There is talk of trying to get back to the West Fork sometime this fall, but if it doesn't happen I'll look forward to another visit next summer. 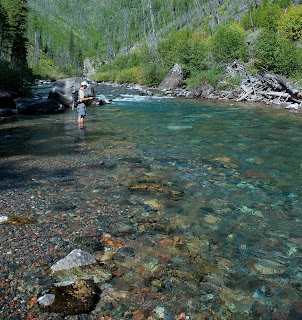 More recently I found myself casting over the high elevation, beautiful tonic water of what I'll just call the North Fork. This river is comprised largely of native fishes: westslope cutthroat and bull trout. Bull trout are protected under the Endangered Species Act and targeting them is illegal in this river, however incidental catches can and will occur due to their habitat overlapping with that of the westslope cutthroat.

Based on a singular, but phenomenal experience at the North Fork last summer, I classify this as a first rate cutthroat fishery. This westslope fishery is comprised of a fair numbers of good size fish willing to rise to a dry fly much of the time. That's much of the time, not all of the time. On this recent trip I was a bit surprised to find that the cutts weren't really looking up as they were last year. I was stubborn and stuck with the dry for a few rather unproductive hours while watching my nymph fishing pal catch fish after fish. I begrudgingly switched out the dry fly rig for a halfback and pheasant tail combination drifted deep beneath an indicator - this setup was quickly greeted by the first of many tugs. 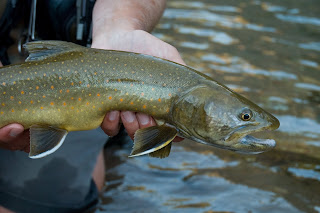 There were occasions during this trip when rising fish were spotted and dry flies were called upon, but for the most part we fished below the surface. In addition to attracting scores of nice cutts, we found that an occasional bull trout couldn't turn down a stonefly nymph. I landed a beautiful 18" bull on a stonefly nymph and lost a true giant (25" plus) the same day - a fish so powerful that I felt I was completely at its mercy. Unfortunately some very bad luck intervened a few minutes into the fight when my dropper nymph somehow got hung up. This provided the fish with an opposing source of tension, which it utilized to slip from my hook. What's crazy is that my dropper fly didn't hang up on a rock or submerged log, but rather on a rusty old double beadhead golden stonefly nymph which was already hung up on the stream bottom! What are the odds of that!?! It was a major disappointment to lose that fish, particularly in that manner, but it was amazing to have a connection with it for even a few brief minutes.

Here's to hoping that you found your way to some equally amazing high country fishing this summer.
at 5:12 PM