In Search of Salmonflies 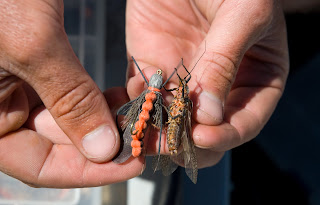 I consider myself a fairly avid angler, yet one of Montana's classic fly fishing experiences has long eluded me...the salmonfly hatch. In large part I blame the situation on having resided in Billings for far too long, distanced from the hatches of southwest Montana. It wasn't as if I didn't make the effort in those years, it was just that my annual pilgrimages to the epicenter of salmonfly activity and locations such as Gardiner, Big Sky, Cameron and Melrose, never seemed to find me in the right place at the right time. I never so much as saw an adult salmonfly, to say nothing of catching a trout on a salmonfly dry. 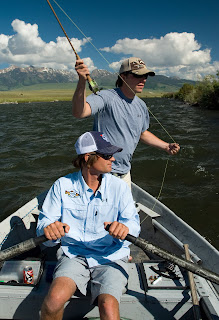 This year would be different I told myself. My recent relocation to Bozeman was a step in the right direction, putting me within striking distance of some of the best salmonfly water in the country on rivers such as the Big Hole, Madison, Gallatin and Yellowstone. In fact I made significant progress in my quest to experience the hatch this year when, in late June on the Gallatin River, I observed an adult salmonfly for the first time. The occurrence was bittersweet since the river was in no shape for fishing, still in the throes of runoff.

Luckily I had a recent opportunity to get over and float the upper Madison River for a day. Reports varied, but the word was that salmonflies were out on the river somewhere between McAtee Bridge and Lyons Bridge at the time, with fair to good dry fly fishing. We arrived at Lyons mid-morning to find somewhere in the neighborhood of fifty vehicles in the parking lot! Opting to try and get ahead of the pack a bit we drove downriver and launched at Windy Point. The morning started off terribly slow, and our insistence upon fishing the big dries didn't help matters. The day was windy and cool and the few salmonflies that we saw were clinging lethargically to the riverside willows. 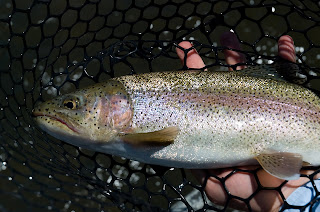 Finally at about 1pm things warmed up and before we knew it salmonflies (and goldenstones) were in the air and on the water in large number, and quite a few fish were looking up for them. We were frantically pounding the banks with our big, ugly dries while fish crushed naturals on the water all around the boat. I missed two or three good fish before finally hooking up. The big rainbow was holding in a pocket, maybe two feet off the bank under an overhanging tree, the take was viscous and the hook set solid. The strong fish fought hard in the fast current. As I plucked the Rogue from the corner of the trout’s mouth, I realized that I had, at long last, accomplished my goal of catching a trout on a salmonfly.

The action died as quickly as it had started, despite the continued presence of naturals on the water as we floated downriver. Our best guess was that the fish had gorged themselves on the big bugs and were no longer all that interested in eating. It was fun while it lasted.

At this point salmonflies are pretty much done for the year in SW Montana. There may still be a few buzzing around in the Grand Canyon of the Yellowstone, or between the lakes on the Madison River, but for all intents and purposes it's over. I'm already looking forward to next years hatch, and I have a new goal...a 20- inch plus trout caught on a salmonfly!
at 3:16 PM