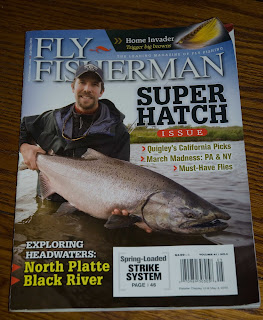 When my friend Josh casually mentioned that AZ's Black River was profiled in the current issue (Apr/May) of Fly Fisherman magazine I was really, really hoping he was kidding. Josh resides in Montana and has never fished the Black, but he's heard me talk about it a time or three. He thought I might be interested in seeing the article. I went down to the local newsstand and picked up a copy...sure enough the cover was emblazoned with the words, "Black River". The magazine devoted 6 pages to this - until now - relatively unknown fishery in AZ's White Mountains. A fellow by the name of Cameron Chambers from Helena, MT wrote the piece.

It's a well written and accurate article...too accurate. Mr. Chambers didn't hold back in his telling of the river's greatness. Throughout the piece he really talks up the river's brown trout fishery and with this line he broke my heart: "as the river transitions between warm and coldwater fisheries, it has the effect of steroids on the brown trout". That wasn't really necessary. By the time I'd finished reading the article I was left with a feeling akin to finding out that your girl is seeing someone else.

The Black River is a rather non-technical fishery, getting to it is really the most difficult aspect of fishing it. Its remoteness may be its saving grace, but Mr. Chambers has just issued a Black River invitation to about 100,000 anglers. Even if only 1% of Fly Fisherman readers have an interest in checking the place out, that is still a lot of people for this river to absorb over the course of a couple of seasons (I believe that the attention a fishery receives from such an article is significant over 1-3 years, but negligible long term). This isn't a large river, flowing at perhaps 100-200 cfs most of the season and with only a few major access points...it could feel crowded in a hurry.

It may seem hypocritical of me to be bothered by this article, considering that I have an AZ fly fishing guidebook in print. My book details the Black River, there's no denying that, but I anguished over its inclusion in the book and I was careful not to over-hype it. Regardless, if all 14 people who have bought AND read my book were to suddenly descend upon the Black River on the same summer weekend, it would have little impact.

I've long feared that someone would eventually sell out and write up the Black River for SW Fly Fishing. Mr. Chambers, you've taken it to another level...I hope they paid you well, sir.
at 9:15 AM