Dusting off the Fly Rod 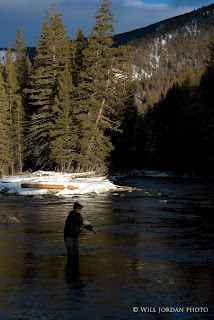 February is a slow time of year for sportsmen in Montana, or just about anywhere for that matter. Waterfowl season has closed, we're still two months from spring turkey season and an ice auger is needed for most fishing endeavors. I've been spending a good deal of time tying flies in anticipation of spring, but all this tying and talk of fishing makes my cabin fever even worse.

After a bit of a fly fishing hiatus during December and January, I decided it was high time I dust off the rod. It's difficult to be self-motivated about getting out on the river at this time of year. Fortunately a couple of my friends have no qualms about bundling up and wading icy rivers in an attempt to shake the winter doldrums.

A recent afternoon outing on the Gallatin River with my buddy Matt was an exercise in futility. Much to our surprise, by the time we fished our way downstream to our destination (a run known as "Hog Alley") we found a couple of other anglers had beaten us to it! This on a weekday in February! Doesn't anyone work anymore? I know, I know, it's the economy, stupid. As the smell of skunk intensified over the course of the afternoon, we lowered our standards a bit and proceeded to target whitefish...with no luck. Regardless, it was a beautiful winter afternoon in which snow flurries and golden shafts of sunlight intermingled in the Gallatin Canyon.

Last Friday I got out yet again for a few hours of fly fishing on the Lower Madison River, a Bozeman area tailwater. On this trip I was accompanied by Josh Bergan, the fly fishing columnist for Montana Sporting Journal, and his friend Brady. Brady was into fish almost immediately and continued putting on a clinic throughout the day. I was a little slower to catch on, landing a couple of rainbows on an egg pattern early on before hitting a serious dry spell. Fortunately Brady eventually took pity on me and furnished a fly he calls, the "Lower Madison Special". As it did on this day, it never ceases to amaze me when the fishing goes from ho-hum to great after simply changing fly patterns.