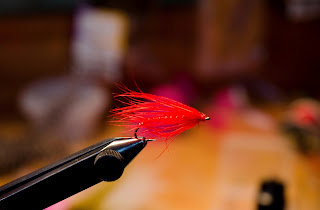 A friend recently handed me a home-spun fly pattern, a prototype of sorts. The naysayers will surely point out that it is not an original pattern, and I do not doubt that. Rather it is a fly that I suspect was tied in a moment of spontaneous creativity. In this day and age that is about as original as any tier can hope to be.

I accepted the fly - and the challenge to catch a trout with it - somewhat skeptically, but agreed to give it a whirl. My friend's only request was that I provide photographic evidence of any fish caught with it. Apparently he has grown wise about simply taking my word for such things.

By the time eleven o'clock rolled around today I could not take another minute of sitting at my desk, looking out the window, and wishing I was on the river. An extended lunch break was in order. I pulled my nymph rod from the rack, clipped  off the remnants of last weekend's outing (a girdle bug and a well-chewed San Juan) and knotted on the prototype. 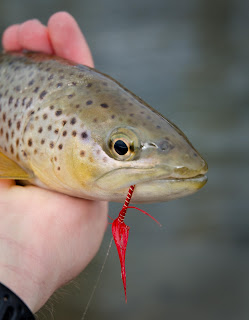 I had just a single copy of the fly, so in an effort not to lose it I fished a short leader with very little weight. I also fished it solo, I didn't want to distract any potential takers with another offering. Despite my lack of confidence in the fly, and the setup, my third drift through a productive winter run resulted in a fine brown trout. A few drifts later I broke the fly off on a submerged log; par for the course on the lower Gallatin.