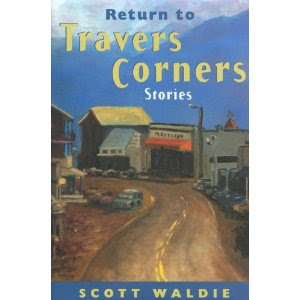 Over the past couple of months I've greatly enjoyed reading the Travers Corners trilogy of books by Scott Waldie. The first book in the series was published in 1997, while the third and final installment came in 2005.

All three books in the series are comprised of a collection of short stories revolving around life in the fictional Montana town of Travers Corners. Each chapter's story is well encapsulated, an appreciable feature for readers who return to the books after extended absences. A cast of lovable characters (and the occasional out-of-town interloper) is expertly woven throughout the series, providing a degree of commonality to each of the stories.

Judson Clark is the main character throughout the books, he's immediately endearing - familiar even. Jud is a middle age bachelor, a builder of custom drift boats, a fly fishing guide, a hopeless romantic, and a kind-hearted man. Jud loves nothing more than spending a summer day fishing the meadows of Carrie Creek, casting dry flies to rising trout with Annie the Wonderlab at his side.

The series is categorized as fiction, but I have a hunch that much of the material is loosely based upon reality. Waldie was a longtime fly fishing guide and outfitter based out of Sheridan, a small town in Montana's Ruby Valley - it isn't too much of a stretch to make the assumption that Sheridan and Travers are one and the same. There is also speculation that the books are based upon Twin Bridges, a community just down the road from Sheridan.

The book is nostalgic and comfortable reading, harking to a simpler time and place: small town Montana.
at 8:44 AM