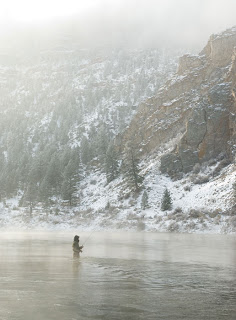 Lying on the river bank, curled up in the fetal position and crying for my Mother I told myself to buck up, but it was to no avail. Soon the next wave of nausea overtook me and I violently expelled the contents of my stomach - for the umpteenth time that day. Wrapped in every layer of down and fleece available, I tried to talk myself into the notion that I'd rather be sick on a river bank than at home in bed. That's a tough sell on a gray December day in Montana. Hugging the dying embers of a lackluster fire, I endured the misery as long as I could. My comrade fished on, but his catch rate was providing me with little motivation to brave the strong, cold current on shaky legs. Shouting feebly over the noise of the river I tried to make myself useful, calling out well intended instructions: "mend" and "set". Dehydrated and exhausted I finally got to my feet, knowing full well that I might need every minute of remaining daylight to make the 1.5 mile hike back to the truck. 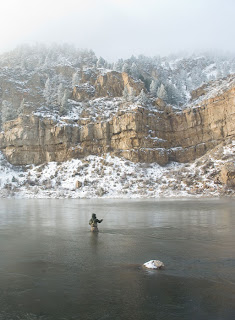 It wasn't the most enjoyable day I've ever spent on the water. But what was enjoyable was the sherbet ice cream, and lemon/lime Gatorade that I scored at a Town Pump station on the ride home, remedies that my Mom used to give me when I was sick as a kid. Seemingly on the mend now that I was able to hold down some much needed sustenance, I was able slip into a more pleasant mind state for the remainder of the drive home - reminiscing about recent fishing trips.

I've already fished more this winter than I ever have during this time of year. The fishing has been good, not a July kind of good, but good. Fishing buddies who really enjoy winter fishing have prodded me out into the cold, icy conditions. Not surprisingly, we've had the rivers - and plenty of cooperative trout - all to ourselves for the past month. It's mostly been a tailwater affair this winter, but our recent warm-up (three consecutive days with highs hitting 40 or more) made many freestones fishable as well. In fact the Gallatin River behind my home had been 80-90% ice covered since the Thanksgiving cold snap, early this week it opened up completely! Productive flies have included black stonefly nymphs, golden stonefly nymphs, sowbugs, and of course worm and egg imitations.

Here are a few photos from outings over the past couple of weeks: 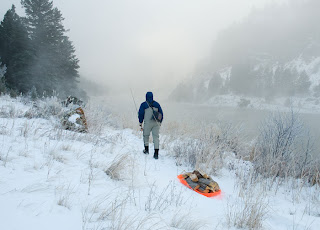 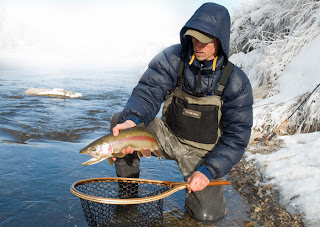 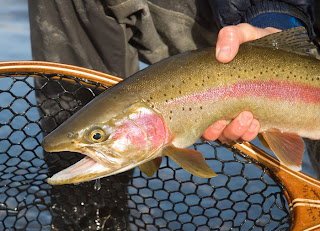