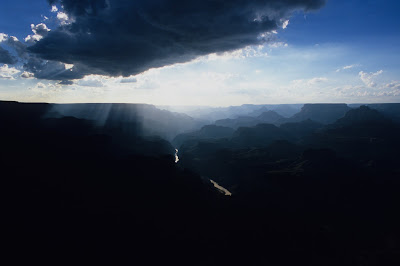 I have an ecological conscience, but...

I just received some very bad news about a trout fishery near and dear to my heart. As I did when a similar situation arose with this fishery a few years ago, I feel the need to share the news.

If you're interested in learning a bit about the situation, continue reading. If not, tune in next time for your regularly scheduled programming.

Once upon a time I lived in AZ, on the S. Rim of the Grand Canyon. I was already a fairly avid angler at the time. Not long after moving to The Canyon I naturally began exploring its depths with a backpack and a fly rod. I soon discovered the incredible trout fishing of Bright Angel Creek and Tapeats Creek.

I'll never forget my first trip to fish BA Creek. I made the long hike down the S. Kaibab Trail and upon arrival at the creek I wasted no time in tying on a curious, beadhead creation of mine. As I worked my way upstream along the creek's pocket water, drift after drift was met by beautiful, wild browns and rainbows. I was mesmerized by the whole experience. To this day that tattered fly still resides on my bookcase as a memento.

I visited BA Creek countless times during the years that I lived at the canyon, and I've returned to visit many times since. BA Creek is without a doubt my favorite fishery in AZ. Despite the pull that BA Creek had - and still has - on me, I managed to slip away to explore other trout streams in the canyon, among them was Tapeats Creek.

I believe that Tapeats Creek offers the finest fishing for wild rainbows in all of AZ - Lee's Ferry included. The plunge pools along the creek's course are teeming with hungry rainbows, including some very healthy fish. The creek is ridiculously remote, the drive to the trailhead is a serious journey and the hike into the canyon is - if you're fortunate - death defying. The creek is seldom fished and while I wouldn't go so far as to call it a virgin fishery, it's about as close as it gets, particularly on its upper end.

These fisheries have it all in my mind: wild country, wild trout, solitude and scenery. Soon though, these great trout fisheries will be severely damaged. NPS is out to kill as many trout as possible in the park.

You see, the GC trout fishery is essentially a downstream extension of the famous Lee's Ferry tailwater on the Colorado River, created by Glen Canyon Dam. The pre-dam Colorado was a warm, silty, highly fluctuating river with great backwater habitat. The post-dam Colorado is clear, cold and calculated. Sadly, since the construction of the dam, many of the native fish species which once thrived in the river have either dissapeared entirely or, as in the case of the Humpback Chub (HBC), are now protected by the Endangered Species Act. These days the river and its tributaries through the canyon are dominated by non-native trout.

You can probably guess where we go from here...the dam isn't going anywhere and NPS is mandated to do all it can to save the HBC. The non-native trout are one of the few variables in this whole equation. The justification for killing trout is that they are preying upon HBC. Studies have found this to be true, there's no denying it, but the level of predation is rather negligible. Trust me, predation by trout is the least of the HBC's concerns. I'm generally all about native fish preservation and restoration, trout or not. However this is a unique situation, the ecosystem has been degraded/altered to such an extent that it's no longer suitable habitat for the natives which evolved to thrive in the pre-dam river. HBC can't reproduce in the post-dam Colorado, it's too cold. Their reproduction is limited to a single, warm water tributary, the Little Colorado River (LCR) - a severly limiting factor for HBC.

Of course the only real solution to restoring native fish populations in the GC is to first restore the river to pre-dam conditions by either decommissioning the dam, or installing a temperature control device in the dam to take water from various levels in the reservoir, thus warming the river to simulate pre-dam conditions. Both scenarios carry some potentially serious consequences.

Several years ago this very issue came to a head, and thousands upon thousands of trout were killed in the GC by NPS and SWCA. Among the casualties were over 500 spawning brown trout in BA Creek, including some fish approaching 30 inches. Fortunately I was able to experience the fishery prior to this tragedy. BA Creek is major spawning habitat for Colorado River trout, and a fish weir placed near the creek's inlet during the last round of trout reduction efforts proved an all too effective way to pick off fish moving into the creek to spawn. Fortunately the program was halted upon the appointment of a new superintendent. Over the subsequent few years, the fishery has steadily recovered from that event, fishing quite well in '09 and '10. It was a short respite. The project has become a renewed priority for NPS, perhaps due to an increased availability of funding for such projects under the Obama administration.

To be clear, I fully support the mainstem river trout reduction efforts in the vicinity of the LCR confluence, as an experiment to see if localized trout removal will in fact benefit HBC. What really bothers me is the tributary removal efforts throughout the GC and in particular the apparent lack of science behind them. Why is there no PIT tag data to prove the hypothesis that browns spawning in BA Creek are subsequently migrating 27 river miles to the LCR confluence and preying upon juvenile HBC? If these trout are being killed based on an assumption, that is utterly irresponsible. Tracking the movements of trout in the mainstem and tributaries seems like the logical first step in this process. Furthermore, neither BA Creek or Tapeats Creek are HBC habitat, never have been, they're simply too cold. NPS openly admits that in some cases (Tapeats) the removal of non-native trout will be done despite no expected benefits to native fish populations in the creek. That seems like a pretty radical philosophy, implying that there is some inherent value to the removal of non-native species in and of itself.

It looks like these incredible trout fisheries are soon going to take a serious blow. Although it is ultimately the goal of NPS, trout will never be eliminated entirely from the greater GC aquatic ecosystem, it's simply too interconnected and too vast to accomplish such a task. Pisticides will never be employed in the park due to the liklihood of incidentally harming native fishes with its use. Fish barriers will never be built at the mouths of restored tributary streams since they would block the upstream passage of not only trout, but also native fish. Rather, seasonal fish weirs and backpack electro-shocking will be the removal methods of choice on tributaries...effective enough to suppress the trout population greatly, but not eliminate it entirely. This project too will fade in time, a future administration will undoubtedly divert funding, putting the project on hiatus, allowing the trout fishery to rebound for a few years. There's nothing quite like bureaucratic inefficiency.

I'd like to tell you that there is something you can do if you'd like to get involved, but aside from writing the park superintendent, Steve Martin, I'm not sure that there are many options. I've seen no mention of an Environmental Assessment and public scoping period for this project, but hopefully that is still to come. If you'd like to keep an eye out for a public comment period on this project, periodically check here.

For further reading on the issue enter, "Bright Angel Creek Trout Reduction" into your search engine of choice. The issue has been written about and addressed by such individuals as Ted Williams and Charles Gauvin, the former president of TU. For a very interesting article in Fly Rod & Reel by Ted, written during the turmoil surround the initial project in '03, click here. I've always respected Ted's writing, but in his more recent article on the subject for High Country News, Ted has gone so far as to suggest that any angler with an ecological conscience should be supportive of the trout reduction project - I beg to differ.
at 9:04 AM