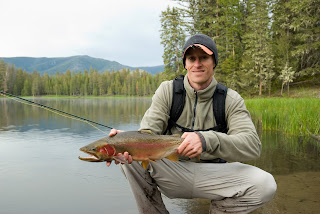 I have been spending a fair bit of time fishing lakes in southwest Montana over the past week. This is notable only because it isn't my usual style. Typically during runnoff I'll seek out fishable moving water in the form of tailwaters, spring creeks or high elevation tributaries that are running clear.

Yesterday afternoon a friend talked me into traipsing up to a little lake in the hills south of Bozeman. This is a lake of local legend, and is certainly no secret. It is well known for harboring large, finicky cuttbows which feast on the lake's robust scud population.

This was my first visit to the lake, and my expectations were quite low as we marched up the slick, muddy trail to the lake. The place has been immortalized by the pen of John Gierach, who has famously written about the difficulty of catching the large fish that reside here. What's more, friends who fish the lake have basically told me that getting skunked here is routine. The bar was set low, very low.

I had ingeniously departed sunny suburbia without a jacket and as we rigged up our rods on the lake shore, the clouds let loose. I sought refuge under pine boughs, all the while wondering if anyone has ever died of hypothermia in June.

Amidst the downpour I spied several aggressive rises by substantial fish. These trout weren't sipping midges, in fact I don't know what they were after. My guess is they were chasing scuds near the surface. It was enough to get me off the porch and out wading through the muck and mud.

Prior to our arrival at the lake my buddy swore that he had a fairly unorthodox technique that was the ticket for catching fish in this lake. It sounded like a sure thing, apparently he'd found success with it here in the past. Yet, for whatever reason his confidence in that technique flagged upon our arrival at the lake. He backpedaled and went with the obvious fly, a scud. I had been clinging to the vestige of hope that his "secret technique" had offered, but it was quickly slipping through my fingers as I watched him peruse his fly box and scratch his head. 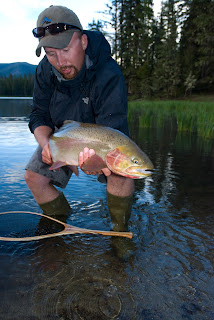 For the first couple of hours we tried this and that, with no luck. Finally about the time that the storm broke and the sun warmed us, I had what turned out to be a bit of an epiphany. Over the next hour or so I landed one brute and lost one more. My buddy even got in on the action, smiling for the camera with a whale of a trout before all was said and done.

I'm no hero, my success here may very well have been a complete fluke, or simply beginner's luck. Regardless, I'm certainly looking forward to getting back up there to find out. Perhaps more surprising is the fact that Rat Lake has opened my mind to the pleasurable possibilities of stillwater fishing. After all, what's not to like about a big pull?
at 8:07 AM