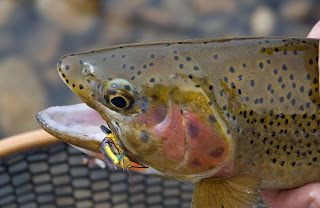 As a kid I enjoyed finding bugs and chucking them onto the surface of our backyard pond. Watching the pond's koi slowly rise and slurp a big moth, grasshopper or ant never ceased to amaze me. Not much has changed now that I've grown up, there's something satisfying about watching fish rise to dry flies, particularly large dry flies. In Montana we're pretty fortunate that we don't have to wait until the June salmonfly extravaganza to fish big dries. March brings another member of the stonefly family to the surface...the skwala.

Over the past two weeks I've been hearing reports of fair to good skwala action on the Bitterroot River near Missoula. Most of the reports indicated there is a small, but widening, window of surface activity every afternoon. 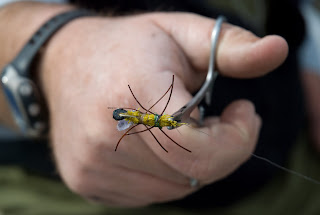 I was itching to get over there and as luck would have it, Scott Anderson - a Missoula area guide - invited us over to fish with him. We hit the river on Sunday morning with beautiful, sunny weather and some serious optimism. The Bitterroot skwala hatch attracts a bit of a crowd, anglers from across the nation flock to the river in March and April to fish this early stonefly hatch. For that reason we fished high on the river, above everyone else. With the exception of one raft launching behind us, we never saw another boat all day! 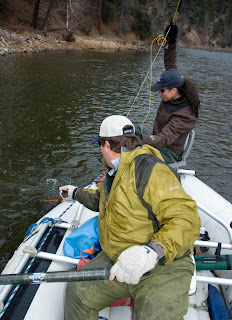 The fishing started off a little slow in the morning, we stubbornly fished dry flies through a futile hour or so. Eventually we conceded and quickly found success after switching over to nymphs. Karen boated the first fish of the day, a beautiful westslope cutthroat. The action gradually increased as the day warmed, and we continued to pick up quite a few fish on nymphs through the lunch hour. Sometime between 1pm and 2pm things changed in a hurry, bugs were out on the water and the fish were looking up. For the rest of the day we fished nothing but big skwala and nemoura stonefly dries, getting takes in nearly every stretch of good winter holding water. Even as the weather turned nasty late in the day we were catching fish on top. At one point Karen and I were doubled up with nice cutts. Most of the fishing was blind, but we did have a few opportunities to cast to heads. Scott took big fish honors of the day with an 18" cutt, but between the three of us we caught several chunky cutts in the 15-16" range.

Scott's knowledge of the river was impressive. I'm a decent stick and Karen definitely has some skills, but without our guide's knowledge of the water our day wouldn't have been nearly as successful. Scott guides for Five Valleys Flyfishing (outfitter lic. # 12094), give them a shout if you're looking for a guide in the Missoula region.
at 8:52 AM