The Grandest of Trout 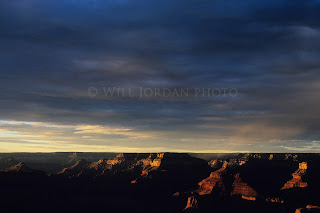 Arizona's Grand Canyon is a special place for many people, myself included. I called the South Rim "home" for four years. That was a time in my life that I'll always cherish. A big part of my Grand Canyon experience was defined by the people that came and went from my life during those years, they really helped me to grow as a person, to open my mind to new possibilities, cultures and ideals. Bigger still was the effect that the canyon itself had on me. Whether sitting on the rim, or exploring the inner canyon, the place has a way of putting everything in perspective, and of fostering a certain awareness within a person. It is hard not to feel a strong connection to a place like this. The trout fishing isn't too shabby either.

Since leaving, I've promised myself I'd get back to the canyon every year. So far I've made good on that promise. Each of the past three fall seasons I've managed to drag my Dad down to the bottom of the canyon at Bright Angel Creek (actually, he does fine going down, it's on the way up that the dragging occurs). It's not usually too tough to talk my old man into the trip as I think he feels a similar connection to the place, in his younger days he spent a lot of time on the oars during Museum of N. AZ river research trips through the canyon.

This fall we made the hike to BA Creek with a friend of my Dad's, Tom, a beginning fly fisherman. On the day of the hike-in we drove up from PHX pre-dawn, had our traditional breakfast at El Tovar and hit the BA Trail for the 10 mile trek. Our loads were pretty light this year, we all just carried day packs with personal items, water, snacks and fishing gear. I had scored beds and dinners for us at Phantom Ranch, thanks to a personal connection (thanks Barry, take it easy in TX!). It was good to be back in the heart of the canyon, not much had changed since last time, save for quite a few new faces amongst the "ranchers". We quickly settled into our accommodations and rigged up our rods...daylight was burning! 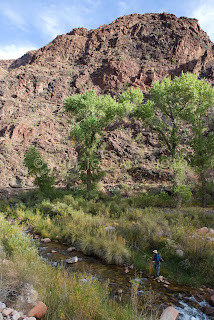 It was early November and by this time in years past there were usually a decent number of browns running up the creek from the Colorado River, and often some very nice rainbows trailing them. Of course things have really changed in recent years with the NPS sanctioned removal of non-native brown trout (and rainbows) from the river and creek. I hit one of my favorite holes right off the bat, a deep pool adjacent to the ranch, where I've consistently found some big fish. This year was no different, a brace of beautiful, wild rainbows fell for my black woolly bugger. At that moment, all was right with the world. I gave a few casting tips to Tom and helped him with the nuts and bolts of line handling. Fortunately this creek is not a very technical fishery and he quickly had a feisty little rainbow on the line. No sooner had we released his fish, the ranch's dinner bell rang.

Dinner at the ranch is always an event in and of itself, the historic dining room is packed with about 50 other hikers and mule riders from all over the country...and the world. The menu consisted of a hearty beef stew dinner, Tecate's and interesting conversation.

We awoke early the next morning, grabbed coffees from the dining room take-out window and watched the sun creep down the canyon walls. Today was our layover day, we didn't have to hike back out of the canyon until the following day. We hit the N. Kaibab Trail, fishing the best holes as we made our way upstream. Everyone was into fish throughout the day, though it appeared that the spawning browns were in short supply. Several nice rainbows (12-16") and an occasional brown took our offerings of buggers and large hare's ears. A couple of large, visible trout (20"+) eluded me in a deep hole that has stumped me more often than not over the years. As we made our way back down the trail toward the ranch, the smell of steaks grilling had our mouths watering. 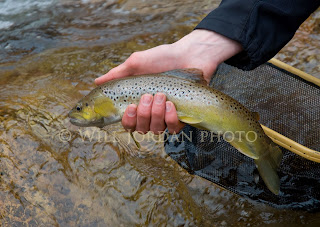 After dinner I slipped out solo to fish the final hour of daylight at the confluence of the creek with the Colorado River. The river produced a couple of solid browns and rainbows that fought hard in the strong current. The spawning run hadn't materialized yet, but there were fish staging around the confluence.

We awoke early on our last day to bluebird skies. My Dad and Tom were eager to hit the trail, they were understandably anxious about the hike out. I bid them farewell, promising to reconvene with them halfway up the trail. I of course had fishing on my mind and set off for the river. I decided to try a side channel of the Colorado, below the Pipe Creek confluence. I picked up a lone rainbow on my tandem nymph rig, but knew I'd better get going if I was going to catch my group.

I set a break neck pace up Devil's Corkscrew and caught up with my companions not long after they'd arrived at Indian Gardens. We finished out the last few miles of the trail together. I played tour guide, pointing out pictographs along the trail and giving geology lessons. At the top of Jacob's Ladder we were lucky to come across a band of bighorn sheep, including an awesome full curl ram. As we topped out at Kolb Studio, we basked in euphoric exhaustion, feeling a sense of pride and accomplishment...and for me at least, a sense of renewed connection with this amazing place.
at 11:08 AM